The people of the world are moving to, and breeding in, cities faster than ever before. Rural areas are becoming more sparse, towns are becoming small cities, and big cities are becoming megacities. In 1951 only 751 million people lived in cities, now, in 2018, 4.2 billion people live in cities, and by 2050 it is projected that 68% of the world population will reside in one of these dense man-made environments. Urban planners, architects, and governments recognize that supporting this tremendous population growth will require environmentally sustainable solutions. Solving this problem will require a multifaceted approach involving drastic reductions in petroleum consumption and carbon-dioxide emissions, but also ingenious ways of integrating rural life into the urban fabric. 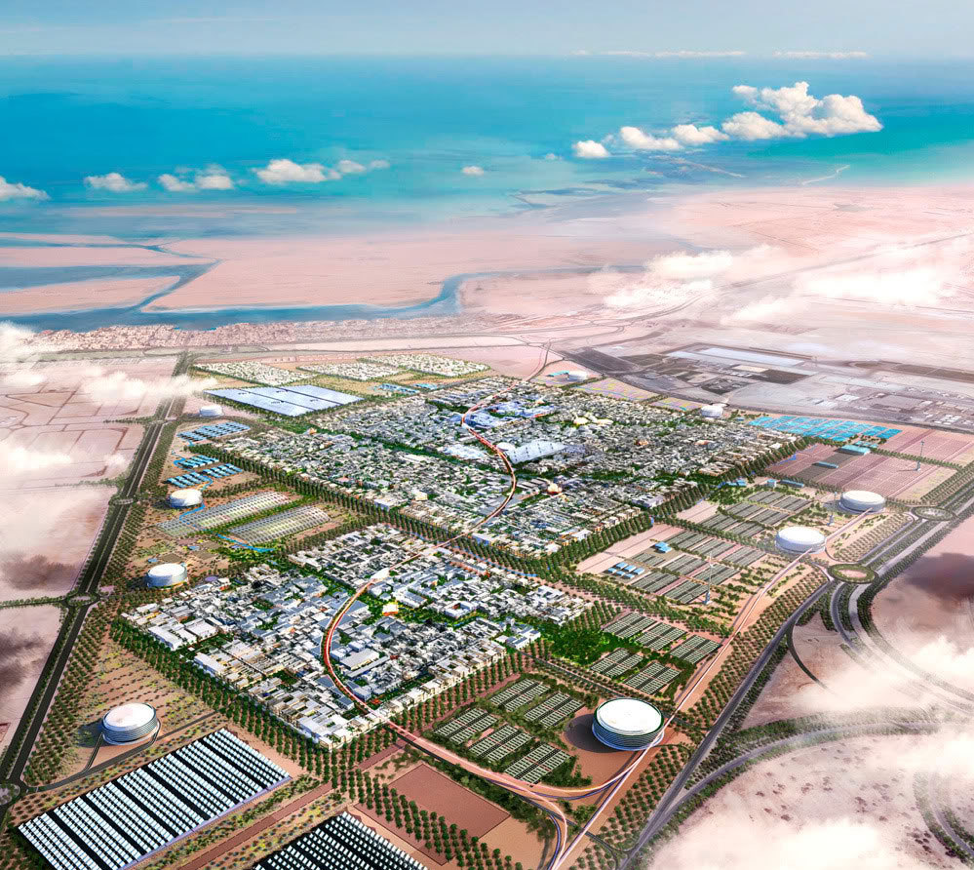 and Sociópolis in Valencia, Spain 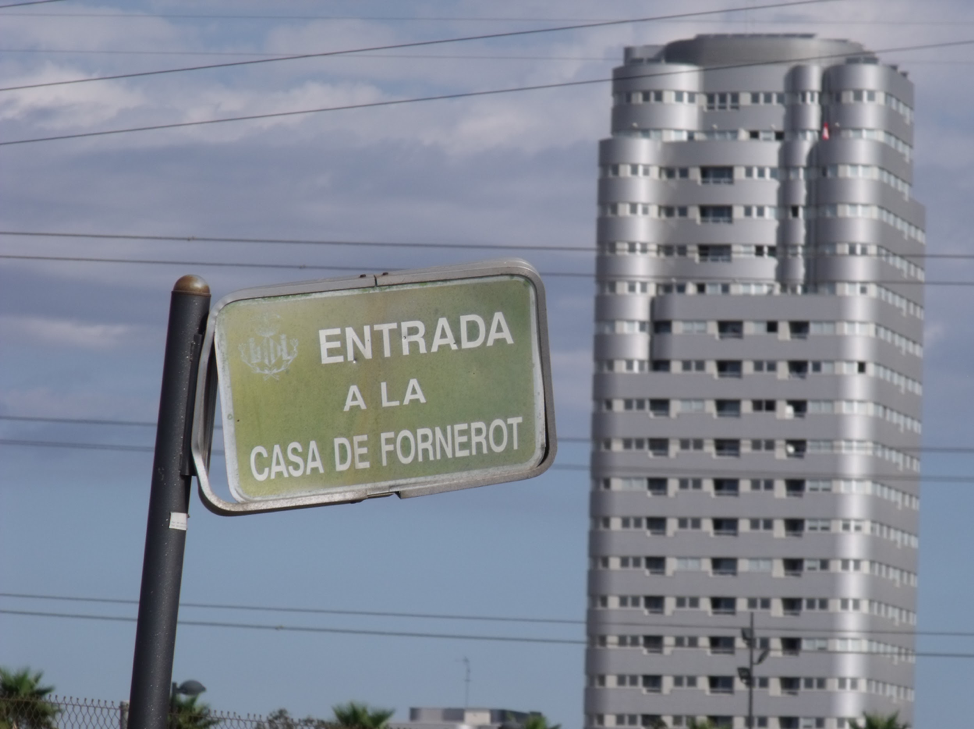 purport to offer solutions, while creating a rich and flourishing urban fabric for their residents. Sociopólis was designed to traverse the rural and urban divide, and promote social interaction between residents. Masdar City was intended to be the world’s most sustainable eco-city. While these cities offer many positive contributions to urban design and sustainable city planning, questions still linger as their completion is repeatedly delayed and onlookers wait to see if they offer genuine solutions for sustainable development.

Master planned cities have troubled history in the last century. Under the influence of Le Corbusier, they have tended make the car the central point of urban design. Unfortunately, the car is not the machine of the future. Cities planned around them suffer from polluted air, and impersonal urban experience. In addition, these kind of cities display a resistance to the organic change and growth. Master planned communities tend to create impersonal and banal urban environments, because, as is the case with Brasília and Chandigarh, they reflect the realization of one person’s ideology, rather than the lives of its residents. These visions have been grand and beautiful, but they have not been environmentally sustainable or personal.

Sociópolis offers an alternative to the urbanist tradition of Le Corbusier. It will create a functional and adaptive urban space, of suitable density to promote social interaction, which mixes the agricultural practice of the huerta with amenities of modern life. Sociópolis was commissioned in 2003, to be constructed on the huerta, an area that has historically been agricultural land, in outskirts of Valencia, Spain. Architect Vicente Guallart envisioned Sociópolis as, what he termed, a “solidarity-based habitat.” This design proposes to improve social interactions through inclusive housing projects and public spaces, while fusing rural and urban elements into a “rurban” environment that promotes sustainable community based agricultural practices.

Housing in Sociópolis will be socially inclusive and affordable for people living on welfare. The goal is to accommodate elderly people, immigrants and refugees, and people with disabilities, in addition to young people with limited budgets, in units that are adaptive to the needs of their denizens. The architects recognized that young people are choosing to delay childbearing until they are older. In addition, the family unit is also shifting from the nuclear family to virtual family arrangements, wherein people who are not blood relatives associate as families tend to by sharing resources and responsibilities. Residential units are designed to reflect the open-endedness of contemporary life styles. 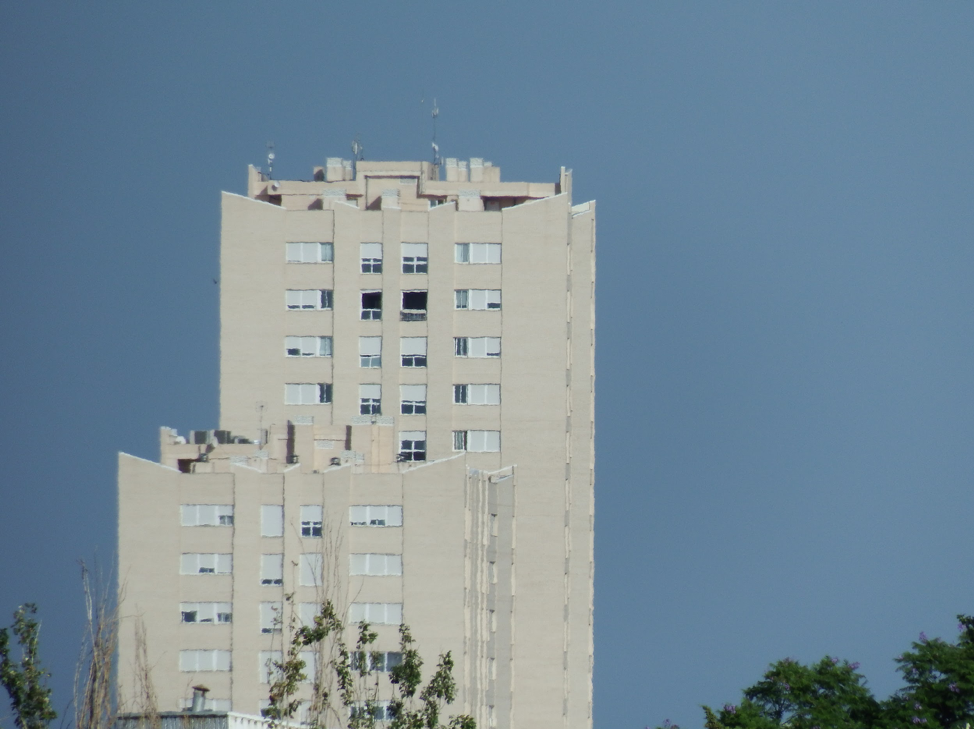 One of the principle goals of Sociópolis is to create a city that blends rural and urban, with the intention of redefining the line between artificial and natural that urbanism has created for itself. This is a objective that both promotes socialization and ecological sustainability. The huerta is an agricultural space originally developed by Arabs with irrigation channels around 800 years ago. The land slated for development will embrace this traditional land use by constructing community gardens. These gardens will be maintained by residents and will provide a source of nourishment both physically and socially by creating spaces for community to flourish around. This represents an urbanism designed around the scale of the individual human. It seeks to give residents a sense of place by creating spaces that they give back to and which, in turn, give back to them.

The urbanism of Sociópolis finds a kindred spirit in the guiding principles and objectives of Masdar City near Abu Dhabi. Construction began in 2007 on what is intended to be the world’s most sustainable eco-city. Every detail of Masdar City’s master plan is designed to promote energy efficiency. The entire site is raised 23 feet off the ground to provide cooling airflow, narrow streets are angled to increase shade throughout the day, all light and water fixtures are motion activated, instead of petroleum fueled cars, a network of automated electric cars operate beneath the surface for public transport, solar panels will be installed on all rooftops, there are plans for a geothermal plant, the city’s waste will be recycled via an energy generating incinerator, and the list of innovations utilizing renewable technologies goes on. Masdar will also house the Masdar Institute, a graduate university associate with MIT that will focus on research and engineering of environmentally sustainable technologies. 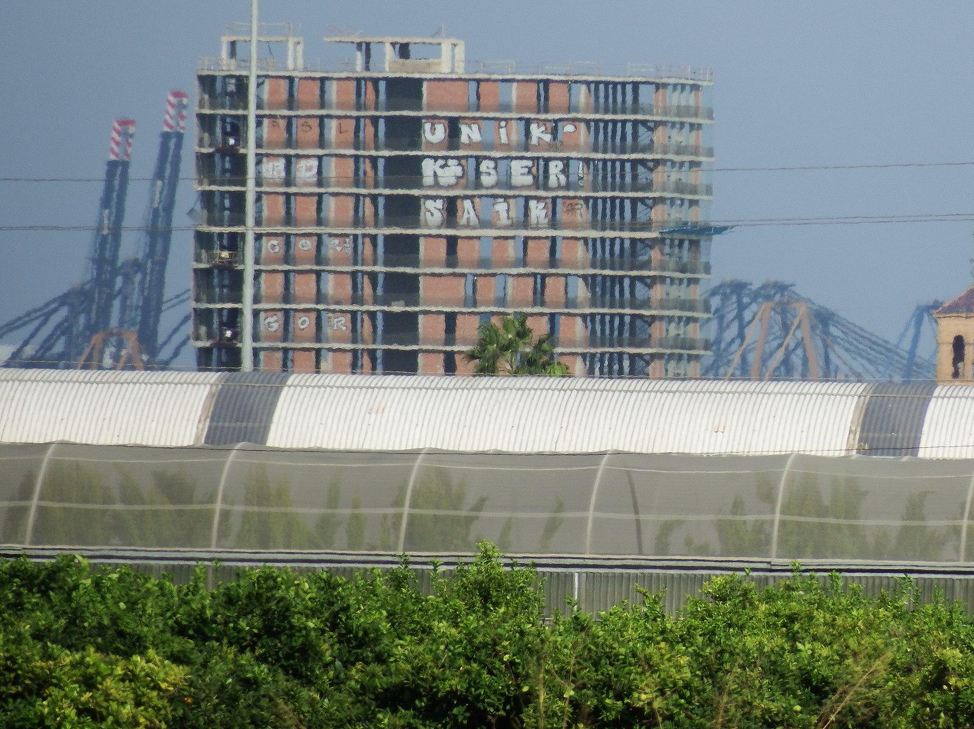 When completed, this self-contained eco-community is designed to support 40,000 residents and 50,000 daily commuters. The demographics promise to be an international mix of graduate students, academics, and white-collar professionals. Masdar officials hope to attract international businesses interested in pursuing renewable technologies by offering tax incentives. The city is designed to create a pedestrian-centric urban environment where residents live, shop, and work in the same place. These are ambitious goals that, as of now, remain on the distant horizon. 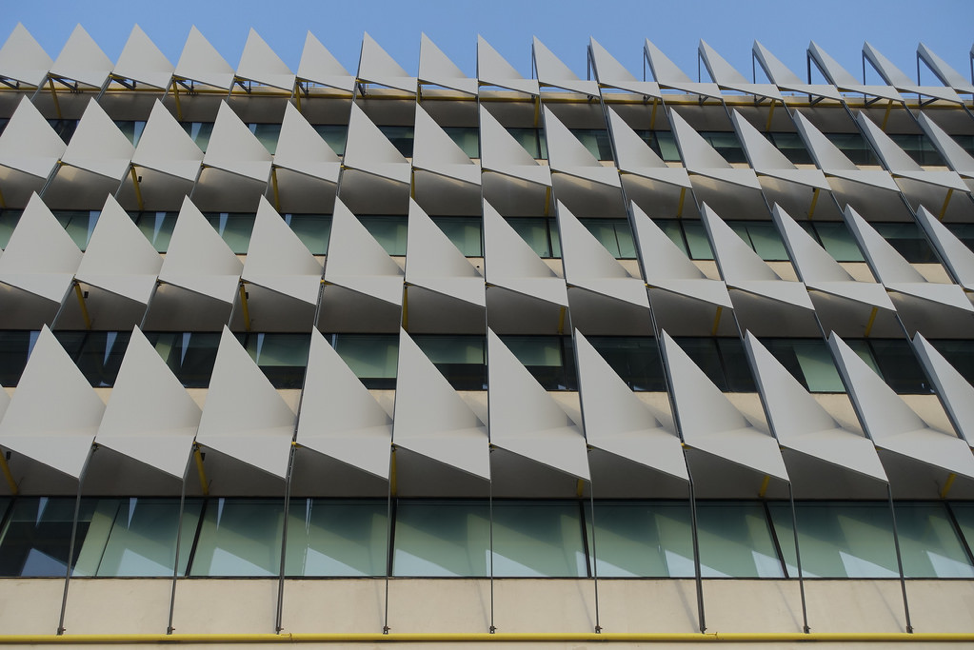 Masdar City offers a lot of promise as a heuristic for environmentally sustainable urban planning, but it also begs a lot of questions. The Abu Dhabi government has ample financial resources to finance this project over a long period of time, and allow it to develop as engineers reevaluate their plans in light of new technologies and unforeseen problems. Sustainability, it seems, should not be solely an issue of technology. Masdar is a city that is engineered to every last detail. While that is a benefit in so far as it serves its end as the most sustainable city on the planet, it also creates a city that is like an island both socially and infrastructurally. 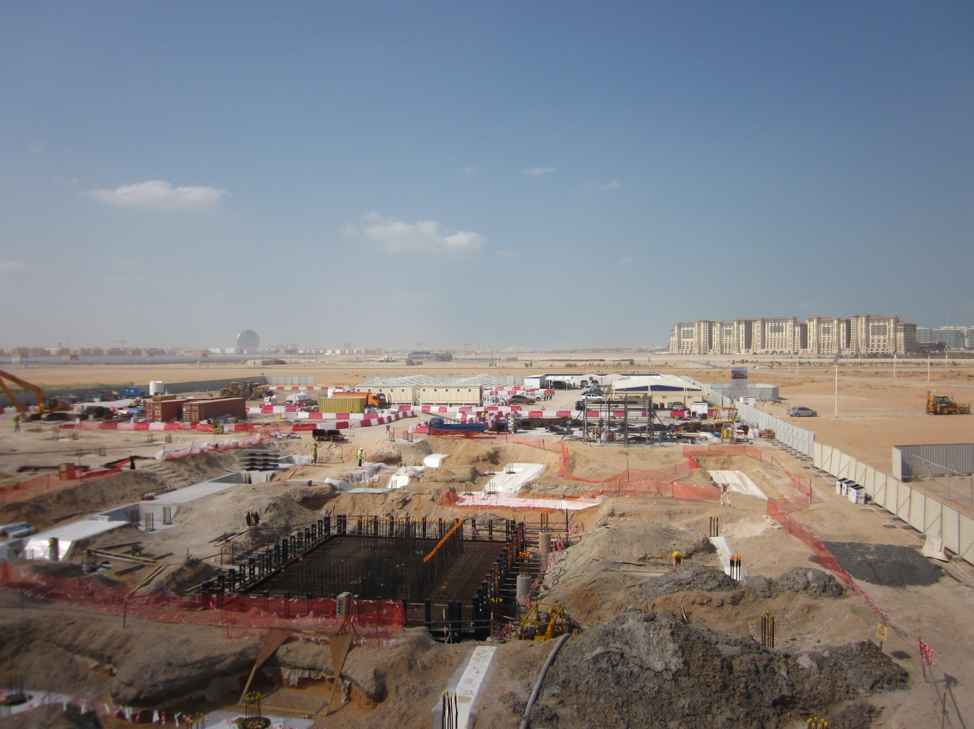 The designers of Masdar do not address how the city will interact with its surrounding environment. For example, what is the ecological footprint of 50,000 people commuting everyday to serve the permanent residents? What is the net carbon output to transport food into the city? It might be argued that Masdar will, in due time, generate enough carbon neutral energy back into the grid to offset these environmental expenses. The city, however, still operates within the context and ideology nonrenewable energy because it does not offer a holistic approach to ecology and sustainability. 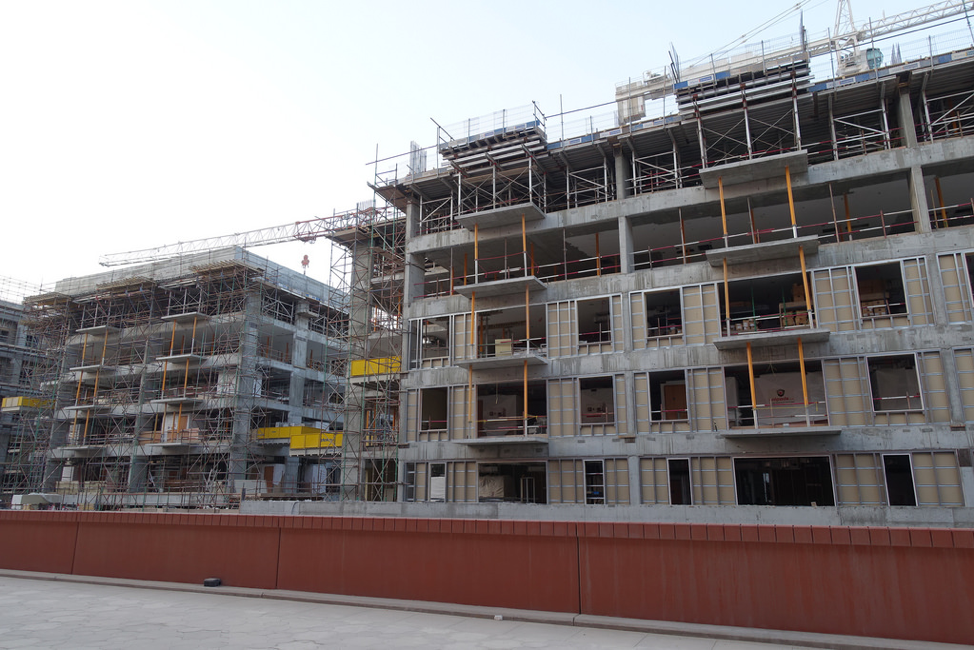 This partiality is especially glaring in the demographics that Masdar aims to have. The city will be populated primarily by a white collar business class, scientists, and academics, creating a kind of technocratic community, that is served by those from outside. There is no plan for integrated housing for people of different backgrounds or economic classes. The inevitable result will be a two-tiered society, rendering Masdar a kind of technocratic eco-friendly oasis for the elite. A plan for environmental sustainability must also look beyond technology, and consider the social aspects of creating a sustainable community. Human needs are, ultimately, the primary motivation behind urban planning – right now, an essential aspect of those needs call for creating a sustainable means to live. Ideally, these plans for the future include all humans, and not just the ones that can afford the rent.

The Sociópolis masterplan accounts for the social aspects of sustainable urban planning that Masdar City lacks, but it could certainly incorporate many of the technological advances pioneered in Masdar. Funding has been an issue that has stalled progress in Sociópolis for many years. Valencia’s financial wherewithal is certainly dwarfed by that of the UAE. Attempts to integrate some of these ecological technologies could pay off in the long term. Integration of rural and urban spaces along with functional and socially inclusive housing is a good start, but cities in the future will need to incorporate technologies that drastically reduce their carbon output. Masdar has, without a doubt, offered the world a heuristic in that direction.

Neither Sociópolis and Masdar City have written the future of sustainable ecologically sound urban planning, but both offer great improvements on the status quo. Progress has also been slow at each site due to financial concerns. In the end, maybe that is to their benefit so that they can grow gradually, allowing designers to adapt to unforeseen problems and incorporate new technologies. Master plans cannot account for every variable, especially as it concerns systems as complex as rapidly growing urban environments. Sociópolis and Masdar City are two innovative plans that, although imperfect, are a step along the path toward building the ecologically sustainable cities of the future.